The Fridge & The Beast: A Tenant’s Lament 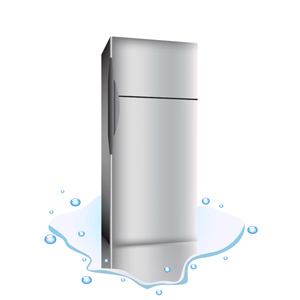 So, I have this refrigerator, see?

And let me tell you, the thing is a hot (err…cold) mess. About two months ago I realized that puddles of water accumulate at the bottom of the fridge, underneath the two vegetable drawers every so often. So much water, in fact, that every time I pull out the drawer to grab myself an apple, it’s like Deep Impact all over my shoes and floor.

I let it slide and used a sponge to soak up most of the water, but as the weeks pressed on, the more the water kept flowing. Now, let me just preface that I am not one to complain to my landlord or property manager. Maybe it’s because I’ve lived in reasonably nice places in the past that haven’t had many issues, but in this case, I was urged to contact the property manager, who I’ll hereafter refer to as…Jemima.

Jemima is a robust woman in every sense of the word. Firstly, her physique resembles that of an exasperated walrus, thereby causing her to walk like an Emperor penguin with an icicle up its butt. Her raven hair, cut short into an ear-length bob probably looked very fetching when she was in kindergarten and from what I’ve gathered from our conversations via phone and in person, she doesn’t have too much going on upstairs. When she speaks it sounds like she has a chronic case of cotton mouth, or like she just chugged an eighth of vodka, and when you say something to her, her Miss Piggy face doesn’t register your words nor meaning, and instead she crinkles up her nose, lets her mouth fall agape, and grunts. Also, every text message she sends has at least 14 spelling errors, but ya know, whatever.

Now do you get why I never complain about anything apartment related?

So I pick up the phone to text her about the fridge (AGAIN – the first time was exactly one month prior) because now the water, which is starting to smell like fish, is soaking through onto the floor underneath the fridge. She fails to respond.

Well, I expected as much. 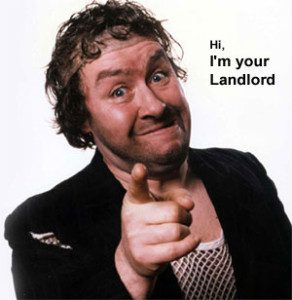 About two hours later, I hear the front gate open and see the BEAST in all of her glory, waddling toward my front door, which was wide open. I didn’t call out to her right away as I was hanging out with friends, yet kept a watchful eye on what she was doing at the property. (She uses the garage as a storage area and was picking up some supplies).

While watching out the window, I thought I saw…no! It couldn’t be! Could it? Was she…I did a double take…PREGNANT!???

Right then, the ground beneath her opened up from one of southern California’s famous earthquakes and she fell straight down past the center of the Earth into Satan’s lair.

She was however, with child, and her baby-daddy (because let’s face it, we know she can’t be married) was accompanying her. She was there for about 5.5 minutes and then left. Hmm.

About an hour later, I texted her and asked for the landlord’s phone number. Then Jemima texts me back. She asked me if I had received the text she sent earlier. Excuse me, what text? OH REALLY? YOU”RE GONNA PLAY THAT GAME? Both of us know she didn’t text me. However she swore she said, “yeah I told u I wuz gnna be by ur place 2day but I checked and nobody wuz home.”

Really, you sent that text? And you checked if I was home? Huh. Because I’m fairly certain you booked it off the property as fast as your thunder thighs could carry you. However, to her credit (?) she notified the landlord and said he would come fix it this coming weekend.

In the meantime, I’ll probably have to go through 6 cans of Fabreeze and try and pretend like I’m not having seafood every night for dinner. Thanks, Jemima.